I’m going to try and not say too much about the Zion Traverse and let the pictures do the talking.  The Zion Traverse is a almost 50-mile route across southern Utah’s Zion National Park.  Five of us from Lander did the run on June 2nd, with me and Evan starting at the East Entrance, and the team of Jenny, Emily, and Amber starting from Lee Pass.  We couldn’t have done the run without my parents, who made the trip down from Wisconsin to watch our little one for us, resupply each group half way through the run, help cook meals, etc.  So thanks Mom and Dad! 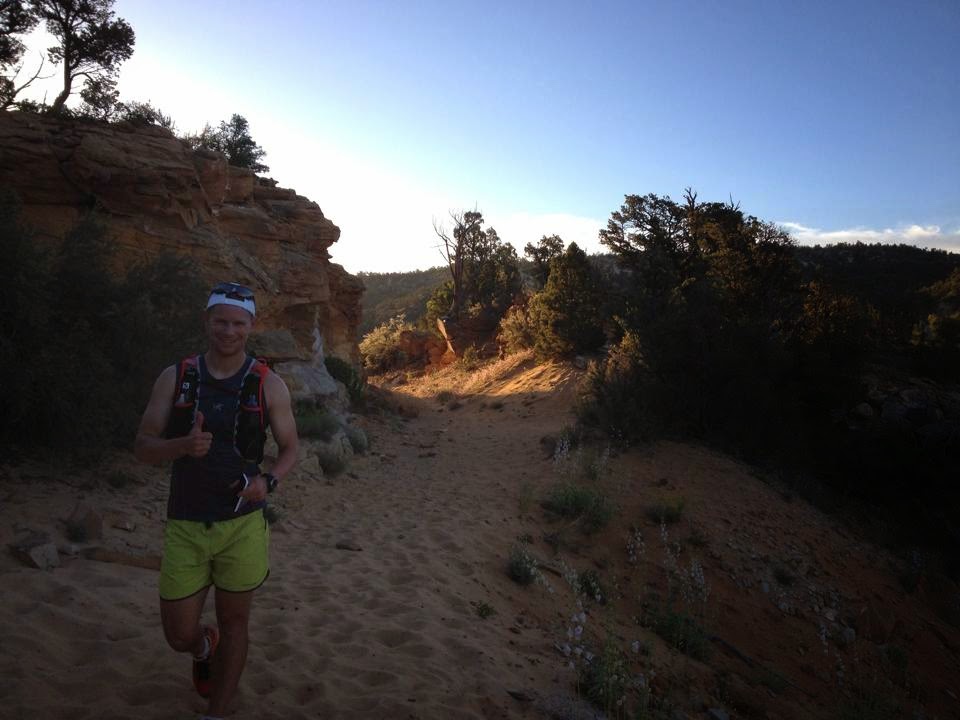 Evan and I started on the sandy trails of the East entrance shortly after sunrise.  The temperatures were very pleasantly cool, which we appreciated because the day before was in the upper 90s by the afternoon.  With the mellow downhill trails, cool temperatures, and fresh legs we made quick progress down to the spectacular network of trails and slot canyons to Zion Canyon.

After a quick pitstop at the Grotto, we headed up the other side of Zion Canyon towards Angel’s Landing.  Still feeling fresh, we zipped right up the zig zagging switchbacks, which were thankfully still partially shaded.

Angel’s Landing itself was very cool, but the scramble up was just OK.  Naturally it was a little crowded (everything is compared to Wyoming), and many people were in way over their heads.  There are chain hand rails the whole way up, which are pretty overkill, but I suppose they help a lot of people with the big exposure.

The next section of trail along the West Rim was some of my favorite of the whole run.  Evan and I made slower progress here because we stopped to take so many pictures of the endless jaw dropping big views.  We didn’t care though, we felt good and weren’t in any hurry, and opted to take in the landscape and worry about speed another day.

By the time we were getting to the West Rim Trailhead to meet my folks at about mile 32, it was starting to get hot, we had ran out of water, and we were starting to feel a little tired.  We rested up for awhile, drank a bunch of ice cold coke, ate some food, and got ready to go again.  We reached the west  rim just 15 minutes after the ladies group so we had fun handing out for just a little bit.

Up until mile 32, the run was pure bliss. After that, things got tough for both groups.  It got hot, I mean really hot.  I don’t have actual temperatures to say just how hot it was, but it was hot and it sucked and you can just trust me on that.  Our situation got worse in that many of the spots that supposedly had water according to Andrew Skurka’s website did not have any water.  We were aware going into this that Utah had a dry spring and it was already June, so water could be scarce.  But running out of water when its really hot out is always depressing.

Evan and I made our way to the Kolob Plateau and Hop Valley while the ladies enjoyed the West Rim and cooked on the way to Zion Canyon.

Things went from bad to worse for me in the Kolob Plateau.  I started to have lot’s of heat exhaustion symptoms highlighted by diarrhea and heat cramps.  I tried to stay in the shade and drink fluids, but nothing was going down without making me sick.  I sort of stopped eating and drinking, which I knew would have consequences, but more diarrhea was not really acceptable.  So the running slowed down eventually to a death march pace, but I tried to continue to enjoy the beautiful terrain.

I choked down an Epic bar (which I usually enjoy) in an effort to get some more energy back, but that came up later as the most disgusting looking throw-up I’ve ever seen in my life.  We finally made it back to the car after about 13.5 hours.  Not the time we were hoping for, but fortunately this was a “fun” run and not a race, so its all good.  On the drive back to our campsite I threw up a few more times, and I wasn’t able to eat anything until the next morning, which was a huge bummer.  The ladies had a tough finish too, with even less water than us, tendonitis flaring up, and gashes from falls; they finished just as the sun was going down.  So none of us were as fast we would have liked, but it was a good exercise in moving forward and staying positive, even when we all felt like crap.

So that is Zion in a nutshell. Since then I’ve been on vacation in Wisconsin, which has been quite exciting; my brother got engaged and Jenny’s sister had her first baby!  On Saturday I’ll be in Wyoming again pacing Evan for the Bighorn 100, and then Jenny runs the Northfork 50 the following weekend.  Maybe we’ll fit a little relaxing in there somewhere as well.  Maybe.