I’ve trained hard this spring and summer, and much of that training was with the Telluride Mountain Run in mind.  Every time I needed a little motivation to train I just took a quick glance at the elevation profile for the race: 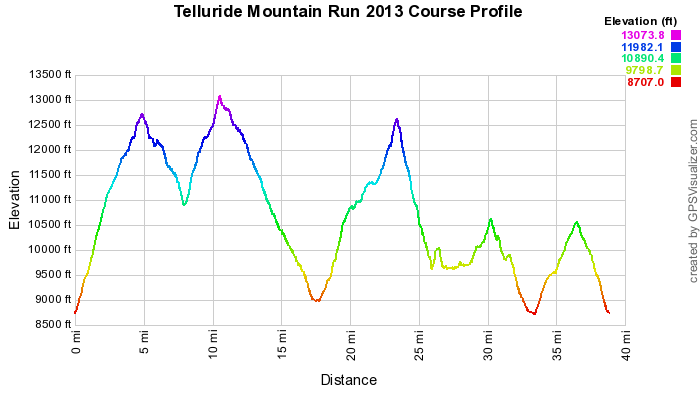 The race started nice and early shortly after the sun came up at the base of the Telluride ski resort.  Our lovely course started with a 4,000′ climb in 5 miles basically to the top of the ski hill.  A couple of guys took off up the hill and ran really steep stuff, while another group of us moved quickly and efficiently after them, running when we could and hiking when we thought better of it.

After the top of the ski hill, we dropped down close to 2,000′ feet into the beautiful Bear Creek drainage.  I thought the trail down was especially fun because it was fast and relatively smooth, but had big exposure.  A misplaced step could send you for a tumble that wouldn’t help you win any beauty pageants.  After our 2,000′ decent came time for a 3,500′ climb through thick wild flowers of every color to upper Wasatch Pass, a little over 13,000′.  The two front runner guys were a good bit ahead by this point, and I was running in a pack with three other dudes.  The scenery was so spectacular that we joked about screwing the race and just hanging out up there all day.

Next came the 4,000′ decent to the first aid station of the day.  I felt amazing running the long, semi-technical downhill.  The temperature was cool and the trail was smoother than I’m used to in the Winds so it felt easy.  In hindsight, I probably pushed the pace a bit too much at this point, and should have saved some of my quads for later.  I left the Imogene Aid Station at mile 17 very quickly feeling good and in third place.

There are three really big climbs in the TMR, and I was confident that if I could get over the third feeling good that I’d be in good shape for the rest of the race.  The third climb was honestly kind of crazy.  Parts of it were up old mining trails with sharp and rusty iron obstacles sticking out of the ground in random places.  Parts of the climb had no trail at all.  One rocky chute was so steep that I was using all four limbs.  I cursed out loud at co-race director Dakota Jones when I grabbed on to some ridiculously thorny weed while scrambling up.  As rough as the climb was, I was moving well.  I could see 2nd place just a little bit ahead of me, and I could see first just a bit ahead of him, and I was gaining on them.  However, 4th and 5th seemed to be making slow progress on me as well, so it was turning into an exciting race.  As it turned out, first through fifth place basically all made it to the top of the pass at mile 23 close to the same time.  Next was another big downhill.
This is where my race started to unravel.  I underestimated how much water I would need (not the first time I’ve done this…) and the temperatures got a lot warmer than expected.  I had started cramping a little bit on the last climb, but that didn’t really worry me too much.  I almost never get cramps, and if I do, they go away fast.  Well, this was different.  I was having a hard time running normally down hill as my quads continued to cramp.  I tried stretching my quads out, but that just made my hamstrings cramp.  Damn.  Deep breathing seemed to help the most and I moved OK down to the next aid station in Liberty Bell Basin.  I felt better for a bit, but the cramps just would not go away.  At about mile 29, Anna Frost and her photographer (or whatever he was) passed me and hooked me up with some water. Holy smokes was I thankful.
After hobbling a long a little longer, I noticed I had seen no course markings for awhile.  Being off course was the last thing I needed.  I got to a junction and there were no markings at all and I barely kept my cool.  I cursed a few times, and turned around to see if I got off course.  I found a flag a little ways back, so I knew I was on the right track.  So I turned around again and headed off into the unmarked trail.  Suddenly Anna and the rest of 2nd-6th place appeared walking towards me; they were all “lost” too.  Someone had a phone on them so we tried to call Dakota or Reese to see where we were supposed to go, but we go no answers.  After chillin’ with some Gu we decided just to run down the trail and see what would happen; we were all in this together.  It looks like in that section of the trail somebody helped them selves to the flags… maybe they though they were picking up garbage.

After the Mill Creek Aid Station, I really struggled. I loped along and watched the rest of the top seven speed off without me.  I was so bummed; I felt generally fine but the muscles in my legs were just spasming out of control.  I was ready to run but it just wasn’t happening.  The course ends with a 1,000′ climb back up part of the ski hill, which should have been a pretty easy run, but I was reduced to a death march.  I cramped so bad that I fell down a few times.  I slogged along with a little self-pity as a couple of other guys hiked past me.  When I got to the top, I contemplated taking the gondola down, but then decided to just go for it.  Somehow I ran most of the way down the last 1800′ feet to the finish for a total time of 8:50.45, good enough for 10th place.

When I taught middle school in Mancos for a year I had a then 7th grade student named Simon Kearns.  Simon was a standout in cross-country and track then, but now he has taken it up a few levels.  Simon is 14-years old and he crossed the finish line in 9:18 for 14th place.  Incredible!

Thank you to Jenny and Ella for being my super crew; thank you to Todd and Kate Kearns and everyone else who gave me some encouragement along the way; and thank you to Dakota Jones and Reese Ruland for putting on one rad race.

Every time anybody runs an ultra, or any other race, you certainly learn a thing or two.  Hopefully I’ve learned my lessons about carrying enough water, taking it easy at the start, and how to deal with cramps.  Next up for me, the start of the 2014-15 school year at Fort Washakie High School and the hyper-competitive Run the Rut 50k in September.  Oh, and the Bear 100 in September too.